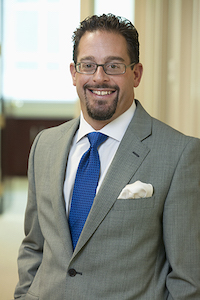 Chris Lenzo has been fighting to protect the rights of employees in the workplaces of New Jersey and New York for over a quarter-century. During that time, Chris has represented employees at all levels, from custodians to CEOs, and even a New Jersey Air National Guard fighter pilot. The cases that Chris has handled have involved virtually every area of employment law, including claims of discrimination, sexual harassment, whistleblower retaliation, failure to accommodate disabilities, medical leave retaliation, breach of contract, and wage and hour violations. The wrongful employment actions at issue in those matters have included firings, job eliminations, layoffs, reductions in force, reorganizations, restructurings, hostile work environments, demotions, and failures to promote.

The approach Chris takes in representing clients is first and foremost practical. What does the client want? What does the client really need? What can reasonably be accomplished? How can we get to that outcome in the least time-consuming and most cost-effective way? What are the pros and cons of each potential course of action? The methodologies Chris uses range from advising the client behind the scenes, to negotiating directly on the client’s behalf, to engaging experienced and knowledgeable mediators both before and after filing suit to get the other side to recognize its potential liability to his client, to litigating cases in court and trying cases before juries.

However, his practicality does not stop Chris from being aggressive when necessary. Multiple clients have told Chris that another attorney referred them to him because he is known as a “bulldog” who does not back down.

Practicality also does not stop Chris from being creative when necessary. Chris is known by his peers in the employment law bar as an attorney who is willing to think outside the box and pursue novel claims to expand the law and take it to where it needs to go to protect employees from unfairness in the workplace.

Much of Chris’s success stems from the respect he has earned from his adversaries in the defense bar, who have repeatedly voted to include Chris in lists of New Jersey Super Lawyers and the Best Lawyers in America for several years.* Those lawyers know that when their clients receive a demand letter or lawsuit from Chris, it is to be taken seriously, because Chris screens his clients and cases carefully. They also know that while Chris will fight for his clients zealously, his credibility and ethics are impeccable.

Chris knows what it means to work for a living. Before attending Harvard Law School, Chris worked as a dishwasher, custodian, laborer, warehouse clerk, and delivery driver. He understands how hard his clients work and appreciates how much it hurts when their employers betray them.

Published Works
Representative Cases
Honors
Past Positions
Certified Legal Specialties
Contact Us
Practice Areas
Client Reviews
★★★★★
"Professional and Knowledgeable Attorney. At what was supposed to be the highest point in my career suddenly became the most harassing and lowest point of my career and I was passed over for a promotion. Not because the other person was more qualified than I was, but because I followed the law and did the right thing and the people I worked for did not like that. After researching several attorneys, my wife and I found Claudia, and the decision to retain her was the best decision we ever made. After explaining our case to Claudia, we found that she was not only extremely professional but a very caring human being. Throughout the entire process of our case, Claudia was there with us every step of the way. She explained every single proceeding that we had to go through and guided us, not only as a professional attorney in and out of court, but personally as a caring and understanding person. Because of her extensive working knowledge of employment and labor laws, Claudia was able to successfully resolve our case. My wife and I will always be extremely grateful for Claudia’s hard work and dedication, and we highly recommend Claudia Reis to anyone seeking an attorney who practices in employment and labor laws." John
★★★★★
"Professionalism, integrity, and determination. Outstanding representation! Chris Lenzo did an outstanding job in my employment discrimination case. He responded to my questions in a timely fashion, provided clear communication through each step of the process, and handled my case in an honest and straight forward manner. Chris’s expertise in employment law along with his hard work ensured justice would prevail in my case and got me the compensation I deserved. Likewise, Chris’s law firm staff was professional, courteous, organized, and effective. I highly recommend Chirs Lenzo’s firm to anyone with an employment legal matter in New Jersey or New York." Sofia
★★★★★
"Remarkable professional. I have worked with Ms. Reis and her firm for the past three years. During the consultation process, you will immediately experience her compassion as she offers suggestions and guides you through the difficult situation you are dealing with. Her attention to detail, timely follow up and candid manner ensured me that I was well-protected and represented. Ms. Reis always went above and beyond to protect me legally. She is a very strong and tough (when necessary) advocate for the individual she represents. Her support staff is equally diligent. I would recommend her without reservation." A.M.
View More
Submit a Law Firm Client Review